By Melissa May 10, 2012
Today, I'm delighted to introduce Cynthia Simmons, author of Struggles and Triumphs:Women in History Who Overcame and its study guide, who's visiting to share with us her road to publication.
~~~~~ 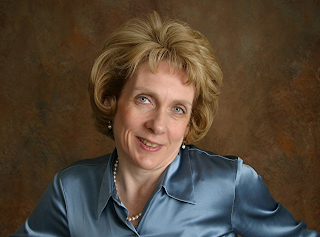 During the late nineties, I went through a very difficult time as I attempted to homeschool my youngest son who has disabilities. Through the hardship, I found comfort in researching history. I wanted to share what I learned with others, so I got interested in writing.
In 2004 I joined Christian Authors Guild (CAG) and started to learn to write for publication. The group offered seminars and classes on writing, which I devoured. The leadership decided to put together a compilation of short stories. I dreamed up three stories and got them on paper. After many critiques and revisions, the committee accepted them into the book, The Desk in the Attic, which came out in 2005. I was thrilled to see my name in print.
The group gave me plenty of experience and helped me master the writing skills. I served as chaplain my first two years there, which meant I had to submit an article each month to the group newsletter.  In addition, I wrote several articles for a history magazine in my hometown. Condensed versions of those articles appeared in the city newspaper. I also had an article on my son published in a newsletter for parents of disabled children and in the Georgia Right to Life Newsletter.
Members of the group went to Blue Ridge Writing Conference, and I joined them. In 2007 I attended classes by Athena Dean who started Wine Press Publishing. I had a set of stories from history and hoped to get it published. Athena assured me I could publish and promote it myself.
After coming home, my husband and I talked. I noted writers seldom told stories of women, especially those with prominent husbands. So I limited my focus to women. My ultimate goal was to demonstrate Biblical truths and encourage women who believed. I chose women whose stories contrasted and called it Struggles and Triumphs: Women in History Who Overcame.
Two months before my book came out in the spring of 2008, my husband had a tonic clonic seizure and slid into the living room floor. We rushed him to the hospital and discovered he was critically ill with encephalitis. As a retired nurse, I knew I could lose him. For a few days, the doctors battled pneumonia from the seizure as well.
The publisher needed to contact me from time to time, and I knew I’d be impossible to reach. So I kept them up to date so the project wouldn’t get bogged down. The staff understood the serious nature of the disease and sent flowers to my home.
During that time my world seemed to crumble. Major appliances broke, and my mother’s health began to fail.  My husband stayed ten days in an intermediate intensive care, but finally rallied. He came home on IV medication. A week later, mother broke her hip. Dad panicked. Even though I lived in a different state, he referred all questions and decisions on her care to me. While I appeared on TV and radio to promote the book, mother’s health continued to decline. I kept in touch with medical personnel by phone and shuttled my husband to doctors and therapists.  I told a friend I hoped mother could hold the book because I knew she’d be proud. God granted my wish. The day before her 76thbirthday, I put the book into her hand. A week later, she died.
In 2010 I started doing podcasts, CAG Spotlight, for my writing group. I interviewed Tiffany Colter, Writing Career Coach. We clicked right away and kept in touch. She agreed to speak at our fall conference in 2011, and I asked her to look at something I started. Several people read the book and wanted more. So I began preparing a twelve week Bible study based on material in the stories. Tiffany read what I had done and loved it. She made a few suggestions. Based on her ideas I completed Struggles and Triumphs Study Guide in the fall of 2011. After several critiques, I submitted it to Writing Career Coach Press for formatting and publication. We went through a number of revisions and chose a cover to match the book.
In many ways I’ve lived Struggles and Triumphs for the last four years. Since March of 2008, I’ve shepherded a family member through a major illness or accident nine times. Both my parents died. I cleaned up after a flood, dealt with a rebellious child, and emptied my childhood home. I can truly say that God is faithful even in the midst of overwhelming heartache. He provides grace even in the darkest times. We always triumph in Him.
2 Corinthians 2:14But thanks be to God , who always leads  us in His triumph  in Christ , and manifests  through  us the sweet  aroma  of the knowledge  of Him in every place . 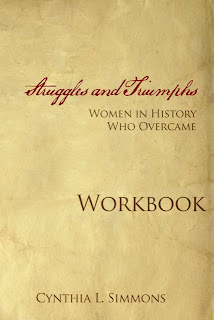 What’s wrong with our world? Shouldn’t a God who claims to be all powerful and flawless prevent suffering? How can we continue to believe when storms rage on in our lives? If you’ve ever had tough questions like these Struggles and Triumphs Study Guide is the book for you. Author Cynthia L. Simmons will guide you toward answers with her unique and enlightening approach. Her twelve-week Bible study for ladies comes from stories of real women as told in Struggles and Triumphs: Women in History Who Overcame. As you study, you’ll come to understand God’s perspective on timeless issues that impact your life. The carefully chosen Scriptures combined with interesting historical information will challenge and encourage you.
You can watch the trailer here, you can purchase the original book here and this study guide here, and you can find Cynthia on Facebook here.
~~~~~
Cynthia L Simmons and her husband, Ray, have five children and reside in Atlanta. She has taught for over twenty years as a homeschool mother and Bible teacher. Active in Christian Authors Guild (CAG), she conducts writing workshops and has served as president, vice president, and conference director. In December 2009 the membership granted her Life Time Membership for her numerous contributions to writers.  “Cindy” is fond of history and writes both historical fiction and nonfiction. Her writing appeared in CAG publications, NATHHAN NEWS, Chattanooga Regional Historical Magazine, Georgia Right to Life Newsletter, Chattanooga Times Free Press, Catholic Exchange, and Christian Devotions.us. Her first book, Struggles and Triumphs, came out in 2008. While promoting her book, she had interviews on radio and TV across the nation and was nominated for 2008 Georgia Author of the year. She also conducts monthly podcasts called CAG Spotlight in which she interviews authors and VIPs in the writing industry. At present she is completing a twelve week Bible study using the stories in Struggles and Triumphs.