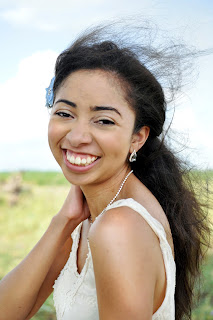 Today I'm excited to introduce Christian fiction author Noelle Marchand who's joining us with a guest post on POV. Noelle is a member of both the RWA and ACFW. She won national and state awards for journalism as a student and sold three books before graduating from college (this month). Noelle is represented by Karen Ball of the Steve Laube Agency.
Here's Noelle...

Point of View: From Ordinary to Extraordinary

The Basics
It doesn’t take long to figure out the basic principles of POV. A simple internet search will yield a treasure trove of information. If you’re going to write for the Christian romance market like I do, it becomes even easier because most publishers prefer third-person limited. That’s a fancy way of saying they expect you to write in past tense, use internal dialogue, and construct the book’s universe only from what the hero and heroine (and perhaps a villain) are aware of through their memory, senses, or learned information throughout the story. If you are writing for a different market, you may have more freedom. However, it all comes down to one thing. Once you figure out the basics, you’re going to need to take your use of POV from ordinary to extraordinary.
1.      Know your characters
The main point of POV is to get inside your character’s head and see their world from their perspective. Many bad habits like head-hopping (changing perspectives too often), are formed because we haven’t taken enough time to really get to know who our characters are as living, breathing, multi-dimensional people with wants, needs, and feelings. Take the time. Sit down. Figure them out.

For example, when I was working on the book I recently sold a book to Love Inspired Historical, the heroine didn’t seem to have a conflict at all. She was just a happy girl living in a carefree world then I realized that she had a secret—a secret she wanted to forget. Suddenly, her world wasn’t so carefree because little things that otherwise might have seemed random to anyone else suddenly took on extraordinary significance from her POV.
2.      Their world through their eyes
In my opinion, one of the biggest things that make fiction ordinary instead of extraordinary is a lack of body language. Think of this as the way your characters move through space. I’m not just talking about the way your character moves while you are using their perspective but also the way they perceive the movement of others. Let’s look at an excerpt from my July 2012 release The Runaway Bride.
“Lorelei!” A strident voice called.
She ignored it. Pressing the back of her hand to her lips, she felt the lump of her engagement ring. A hand caught her arm. “Lorelei?”
She swung around to face her intended. “I can’t. I can’t do this. I’m so sorry, Lawson.”
His handsome face noticeably paled. “What do you mean you can’t do this? We’re getting married today. Right now.”
She swallowed. “It isn’t right.”
“What are you talking about?” Painful silence lingered in the air until he stepped toward her. “I thought you loved me.”
“I do love you, Lawson, but not in the way a woman should love the man she’s going to marry. I wish that I did,” she said sorrowfully then tilted her head to survey him carefully. “Do you love me like that, Lawson? Can you honestly tell me that you do?”
He turned away from her and dragged his fingers through his hair before he met her gaze again. His answer was halting, almost inaudible. “No.”
She pulled in a deep breath and tugged the ring from her finger. “Then this shouldn’t belong to me.”
His eyes filled with resignation as he took it from her. He allowed her a curt nod before he walked back toward the church where his best man waited on the steps. Her gaze caught only briefly on that figure before she turned away.
Do you see how even though this is from Lorelei’s perspective, Lawson’s movements help frame Lorelei’s perception of the event? More importantly, we see that though Lawson is close and emotionally engaged in the conversation, Lorelei’s attention ultimately rests on the figure she perceives as distant and unemotional—her true love.
3.      Trust your characters
If you have gotten to know your characters and see the world through their eyes, they will tell you what you need to focus on. How can these made up people tell you what to do? You have to trust your instincts. If your characters are real enough to you, you’ll instinctively begin to think like they think and notice what they notice inside the margins of your page.
4.      Be honest
The last and most important part of this is to get out of our own way. We have to suspend our own ideals, sensibilities, thoughts, and identities to truly capture the perspective of another person. Take them up again when you put the pen down or close your document but when you are writing your first responsibility is to communicate your character’s emotion, thoughts and world. We are stepping inside their world to become a storyteller so let’s tell theirstory.
### 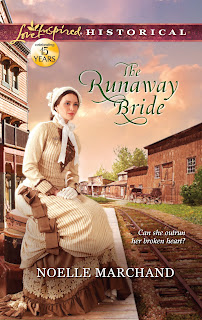 The only husband Lorelei Wilkins ever wanted was Sean O'Brien, but she's wasted too much time waiting for him to love her back. When another man proposes, she accepts—until she stands at the altar…and realizes she can't marry without love. Bolting out of town toward a fresh start, she never suspected her parents would send Sheriff O'Brien to bring her home!

After an innocent mistake leaves Lorelei and her reluctant rescuer with compromised reputations, marriage is their only option. But first they must triumph over suspicious locals, shady characters, an inconvenient groom and the bride's own stubborn heart. Will it take putting their lives on the line for Sean and Lorelei to realize that only love can conquer all?

~~~
Noelle Marchand's love of literature began as a child when she would spend hours reading beneath the covers long after she was supposed to be asleep. Over the years, God began prompting her to write. Eventually, those stories became like "fire shut up in her bones" leading her to complete her first novel by her sixteenth birthday. Noelle is a Houston-native with a BA in Mass Communication with a focus in journalism and Speech Communication.

And you can find Noelle on her website, her blog, and on Facebook.
I don't know about you, but the excerpt alone made me want to buy the book. Great writing, Noelle!  :D