Grammar Police Monday - There They're 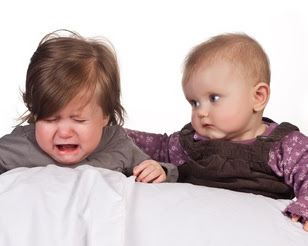 As an extension of our confusable homophones from last week, I've decided to tackle a few in particular. Some of you may find this lesson simple, but enough people get these wrong that I felt it was worth addressing. Let's start off easy...

Two, Too and To:
Two = the number of something.
Sally has two kittens.

Too = also / very.
I have kittens, too. They are too young to give away.
Note: When using 'too' to mean 'also,' set it off with a comma(s). [Edited 6-24-13: Apparently, the comma-before-too rule is no longer a rule. See this post for clarification.]

To is a preposition.
I took them back to their mother.

There, Their and They're:
There = location.
The ball is over there.

Their = possessive pronoun.
Hurry! Go get their ball!.

They're = contraction of 'they are.'
They're going to be angry if you lose their ball.

Whose and Who's:
This one often stumps people.

Whose = possessive form of 'who.'
Whose ball is that?

Who's = contraction of 'who is' or who has.'
Peter is the one who's been stealing my ball.

(Hint: Nouns form their possessives using an apostrophe. Ex: Carrie's ball.  Pronouns don't. Ex: The ball is hers.  They only use them to form contractions. Ex: She's got the ball.)

Same thing goes for It's and Its:
Its = possessive pronoun.
The roof fell when we removed its support beam.

(Hint: Only use it's if you can substitute 'it is' or 'it has.' Use its for everything else.)

For a great resource, try Common Errors in English Usage.

*Blospot.com bloggers - consider turning off word verification (aka 'Captcha') to make it easier for your visitors to comment. Here's a great tutorial video that will lead you through the whole thing. Besides grammar, it's my current crusade.

What's Captcha? Not sure if you have it? You can read more about it here. :)