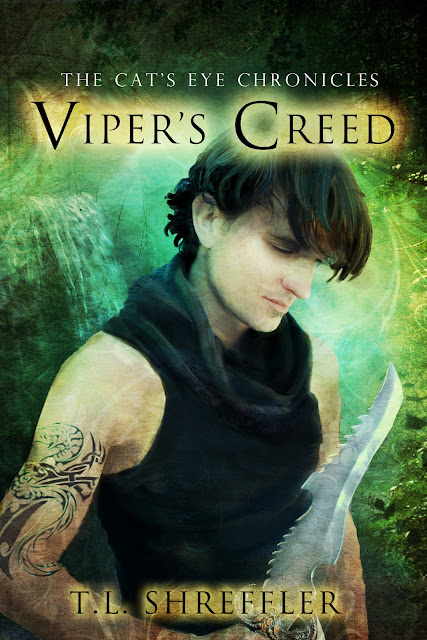 Whether you read fantasy or not, you gotta love that cover! :D

Viper's Creed is the second book in The Cat's Eye Chronicles by T. L. Shreffler and continues Sora's story from book I, Sora's Quest, which was the winner of the SKOW 2006 Best Fantasy Award. (You can read both book blurbs below.)

I've been asked to post a favorite quote from the first chapter of Viper's Creed. Here it is...

“Mom,” [Sora] said, turning back to Lorianne. “You said there's no infection. So how can it be contagious?”

“It's not,” she said, lowering the rag from her own mouth. “Something else is happening here.” She looked at Sora sharply. “This isn't a normal sickness and I have my suspicions.... We need to use your Cat's Eye.”

“Because I think this is a curse.”

Sora planned on running away from her wedding, but she never expected to be kidnapped! Dumped into a world of magical races, arcane jewelry and forgotten lore, she finds herself at the mercy of a dangerous assassin, haunted by an even darker past. She yearns for freedom, but he won’t let her go—not when her Cat’s Eye necklace is the only thing that can save his life.

But the necklace itself presents a problem. It is an ancient device from the long forgotten War of the Races, and its magic has the ability to steal souls. Can Sora learn to wield its power—or will the power wield her? (Winner of the SKOW 2006 Best Fantasy Award)

Sora is having visions. Strange, terrifying visions brought on by her Cat's Eye necklace, an ancient and magical device. Spurred to action, she leaves her mother's cabin to find Crash, the mysterious assassin who once changed her life. She is certain that together, they can discover what the necklace is trying to tell her.

Crash is still on the run from the dark sorcerer, Volcrian, but now a plague is spreading across the land. Volcrian's quest for vengeance has awakened something far more evil than himself; a force that could destroy the entire kingdom. Together, he and Sora must harness the power of the Cat's Eye and kill the sorcerer before it's too late....

Mark your calendars for the Viper's Creed book tour in October, hosted by These Paper Worlds...