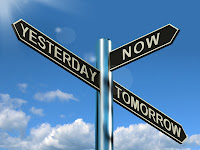 This is a continuation of last week's lesson on verb tense. Today we're going to delve a little deeper—make that way deeper—into the issue. But, basically, the concept is the same. Verb tense is relative. Pay attention to the tense you're writing and stay true to that according to when the various actions happened in relation to each other. Do not shift from one tense to another if the time frame for each action or state of being is the same.

Last week I mentioned basic conjugation, including past participle. For the infinitive 'to play,' that would be has/had played. I've noticed writers seem to make more errors when using past participle—both with regular and irregular verbs. One situation that often leads to an error is combining a contraction with one of these verbs. Let me show you what I mean.

In the above example, the second version is correct. The contraction she'd in its expanded form is she had, and the action happened farther in the past than this past tense story, so the past participle form of the infinitive 'to give' (had given) is the correct choice. The point I'm trying to make is we should pay extra attention to our writing when we venture into past participle, but especially if the have or had that comes before the main verb is part of a contraction.

Now let's touch on some verb tenses beyond the basic present, past & past participle. Before you can decide which tense to use, you have to know your options. Keep in mind, not all of these will apply to every story. It depends on which basic tense you choose.

**Feel free to skim to the next red cue if this gets too intense.
Yes, you read that right. I'm giving you permission to skim! :D
This is a lot of info to take in at once, and I will summarize
the main concept at the end of this post.**

One comment before I get started—I'll show these tenses in the positive form, but you can make them negative by adding the word not to the verb phrase.

Ex: I will be going becomes I will not be going.

Present Continuous (or progressive):
Use this tense to describe something that is happening continuously right now, or will be for a short time. It is constructed by adding a simple present form of the infinitive to be (is, am, are) to an -ing verb. (Pam is sleeping.  We are eating.  Sally is staying with her aunt this week.)

Past Continuous:
This is similar to the above, but with past tense verbs. It is used for continuous action in the past that is interrupted by another action (Pam was sleeping when the phone rang.), actions that happened at the same time (Sally was reading, and Mary was watching TV.), to give background or additional information (The day we went, the sun was shining and a cool breeze was blowing.), and for repeated, often annoying actions (My ex-roommate was always leaving the cap off the toothpaste.).

Future Continuous:
This is for continuous actions that will happen or be interrupted in the future. It is constructed with will + be + -ing verb. (I will be sleeping when you get off work, so slide the check under the door. The mayor will be making an announcement later today.)

Present Perfect:
This one is confusing because is takes past participle form, but it is used for unfinished actions (I have lived in Texas all my life. I still live there.), things that have been going on for a period of time (She has had diabetes for three years. He's known Nancy since 1995.), and finished actions that are either life experiences (I have been to London and Paris.), have a result in the present (I've lost my purse.), or are followed by a word that denotes an unfinished time period (I've been to the mall three times this month.).

Past Perfect:
This tense also uses the past participle form (had ___ ). Basically, this tense is used to give a reason for something in the past or to describe something that was completed before or happened up until something else. (It had snowed heavily, so school was cancelled.  The food had been served when we arrived.  By the time I found a job, I had been unemployed for five years.)

This tense combines the future tense of have, will have, and the past participle form of the main verb. (Ex: will have played) It isn't common, and it is often accompanied by the word by. (He will have managed the office for a decade by the time he's forty-five.)


Now it really gets fun. Not.

Present Perfect Continuous:
This is used for unfinished actions that started in the past and continue to the present, or for actions that just stopped and have a result, or are part of a larger, unfinished action. Note the -ing ending on the main verb. (She has been waiting for Mr Right for years. I have been working all night, and I'm tired.)

Future Perfect Continuous:
This tense isn't used much, but it is good to know in case you encounter it or need to use it. It includes a time reference and indicates an action which will begin in the future and continue up to that time. (As of noon today, I will have been working on this blog post for five hours.) :P

Using tense in fiction writing:
How do you make use of all this information? First, you take into account what tense your writing in, and then you use the proper tense when describing events that happened at a different time to show how they relate to that. I wasn't kidding when I said verb tense is relative.

First person present tense example:
I walk along the beach, gazing at the moon and wishing I had a man to share this moment with me. I have been waiting for Mr Right for years.

Third person past tense example:
Beth walked along the beach, gazing at the moon and wishing she had a man to share this moment with her. She had been waiting for Mr Right for years.

Now let's dissect them...
I walk (simple present) along the beach, gazing at the moon and wishing I had a man to share this moment with me (compound participle phrase indicating simultaneous, ongoing action). I have been waiting (present perfect continuous) for Mr Right for years.

Beth walked (simple past) along the beach, gazing at the moon and wishing she had a man to share this moment with her (compound participle phrase indicating simultaneous, ongoing action). She had been waiting (past perfect continuous) for Mr Right for years.

Bottom line: you don't have to memorize all the verb tense names. You just have to know how to construct your sentences so that both the sequence, relation, and time of occurrence of the actions are clear.

I hope I didn't give you a headache with this long, tedious post, but now we can say we've thoroughly covered verb tense. I hope you found something helpful. Thanks for stopping by. :)