When Melissa and I decided to switch blogs for a day, she asked if I would do a top ten grammar list, since Mondays are her normal Grammar Police days. I said sure.

This was back in January. Remember that.

It’s now June. In between, I jotted down all sorts of funny, strange, or weird grammar gaffs as I came across them. These notes filled two or three pages. In March I hosted a month loaded with giveaways. And in April, I went on a blog tour for my new book. I’m also a proud survivor of the A to Z Challenge that lasts the entire month of April. And in May I fell apart, picked up the pieces I could find, and started over.

Somewhere during this time, I lost all my grammar notes. Most likely, I tossed them thinking they were part of some finished project. Things were a little crazy. And I should know better than to think I could keep track of notes for six months.

So I started over with grammar notes, too. While I could fill a list of ten and have leftovers, they wouldn’t all be funny or clever. So I’ve opted for five that I hope come close. With commentary. I hope this is all right with you and with Melissa.

Whom and Him both end with the letter M.
Hence…the M&M Rule.
Chocolate. Melts in your mouth.

If you don’t know the differences, look them up. After all, we want to make sure we don’t write about cereal killers with baited breath. Cheerios with anchovies? Blech!

That Dang Participle
And by dang, I mean dangling.

To Oxford or Not to Oxford. What is the question?
Some say you must use the Oxford, or serial, comma. Some say no, it’s old-fashioned and clunky. Both sides say it adds confusion, and each can produce examples to prove its point. Actually, the AP Style Guide, used primarily by journalists, says no. However, the Chicago Manual of Style, used by most book publishers, endorses its use.

Whichever you choose, be consistent. Do not use it when it’s necessary for clarity if you’re not using it elsewhere in the project. Instead, rewrite. In the end, your editor will want your work to conform to house style, whatever that turns out to be. So remember … you may find part of your edits will include adding or deleting this particularly testy comma in your manuscript.

Punctuation
And my favorite EVER grammar thingie.
Oh, yes, it is. You may have seen this before, but it’s so awesome that I have to share it here. No matter how many times any of us have seen it.

I don’t recall the exact lead in. A group of people sat in a room. These words were written on a whiteboard: woman without her man is nothing

The instructions were to keep the words in the same order and punctuate them correctly.

The men in the room punctuated this way:
Woman, without her man, is nothing.

The women:
Woman: Without her, man is nothing.

Carol Kilgore is an award-winning author with several short stories, essays, and articles to her credit. Her two novels, Solomon’s Compass and In Name Only, are a blend of mystery, suspense, and romance she calls Crime Fiction with a Kiss. Carol and her Coast Guard husband live in San Antonio, Texas, with two herding dogs whose mission is to keep them safe from all danger, real or imagined. 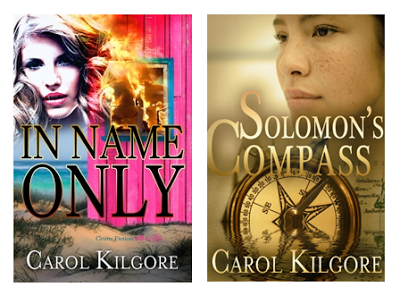 And thanks to all of you for visiting!
If you have time, go over to Carol's blog.
In my guest post for her, I talk a little about myself, but mostly about fiction--what I like, why I like it, and why I write what I do.