To Celebrate the release of her book, Secrets of the Ash Tree, Siv Maria Ottem is taking the Norse Gods with her on a blog tour from October 7th - 14th. Make sure to stop by her blog and see what kind of Birthday Giveaways she is raffling off!

Today, Norse goddess Freya is visiting. This is quite meaningful, actually, because the day Friday is named after her. She is the goddess of love, fertility, and sexual desire. (We'll do our best to keep this PG-13. *grin*)

Mouth slightly open in awe, I half walk, half stumble into the most opulent bedchamber I’ve ever seen. Thick velvet draperies frame stained-glass windows, and rich fabrics sweep down from a stately canopy bed and cover its lofty mattress. “What happened to my blog?”

“I transformed it,” Freya says, waving a hand dismissively. “Your blog is...nice, but I’m a goddess. I’m accustomed to being surrounded by lavish possessions and unequivocal beauty.”

“I can see that. Your necklace is lovely, by the way.”

My heels click and catch in the groves of the stone floor as I cross the room. Clutching my notes, I tuck my knee-length skirt under me with my free hand and take my seat. Then I sit a little taller. I can’t help but feel like a queen on such an intricately carved straight-back chair.

Freya is perched on a brocade settee. She adjusts the skirt of her gossamer gown and sighs. “Can we get started?”

“Yes, of course.” I quickly shuffle through my notes. “What role do you–”

I glance nervously at my audience, then return my eyes to my guest. “Freya?” I clear my throat and smooth the button placket of my blouse. “Um. Perhaps you could put that mirror down and– That's better, thank you.  As I was saying, what role do you play, if any, in Siv’s book,  Secrets of the Ash Tree?”

“Why, my dear, I play a major role in this book. Without saying too much...Liv and I are family, and together we solve some important mysteries through some rather daring adventures.” Freya clears her throat. “It is quite parch in here; some honey wine would be nice.”

Honey wine? Before I can rise to search for it, a young woman wearing a simple brown dress hurries forward out of the shadows, carrying a tray bearing a single silver goblet. A tangy, sweet smell wafts by.

Freya removes the goblet and makes a shooing motion. Never lifting her face, the woman retreats and disappears.

My mouth waters as Freya takes a drink and sets the goblet aside. I lick my lips.

Beady eyes peek at me through the far window. Seconds later, they're gone. “Did you see that?”

“What?” Freya is gazing into the mirror again, preening and patting her hair.

“I’m not sure.” The impish creature presses his nose to the glass, then stubby hands grab his shoulders and jerk him out of sight. “I think some of Father Dragon’s dwarves got loose.”

“They’re not Father Dragon’s,” she says tiredly. “They’re mine.”

“Oh.” I drag my attention away from the window, determined to make the best of this interview. “Speaking of love, does Liv ever find it?”

A slight smile curves Freya’s lips and she sets down the mirror. “I assume you mean romantic love, and yes, she does find it. But I really can't say if she manages to hold on to it.”

Secrets of the Ash Tree
By Siv Maria Ottem 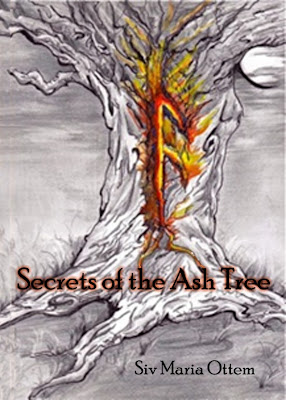 ~~~In the realm of the gods and fairy tales the mystery of life is an endless path with many secrets to be discovered. Some secrets are like dreams, just waiting in darkness hoping to get into the light.

‘Secrets of the Ash Tree’ is the story about Liv, a young woman who discovers her true nature through the unraveling of hidden secrets. Her adventures begin when she digs up a chest that was buried by her father under the old ash tree in her garden. What she finds inside the chest changes her life forever.

Liv discovers one secret after another and is thrown into a world full of dangerous and strange creatures, mighty Norse warriors and perils beyond her belief. What started out as a fairy tale in her father’s journal was to become her legacy, a guide line to survival, and a map to the world she was about to enter. Each day, each mystery, each encounter will ultimately reveal her true destiny and behind the edge of a sword awaits a young god who is willing to share that destiny with her.

Don't forget to add it to