Commas Are Not The Antichrist 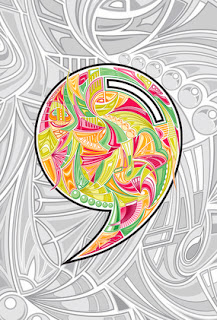 I feel like ranting about commas, so I'm doing that for Grammar Police today.

Commas give lots of writers fits. I know this. The rules governing some commas make their use optional. I also know this. The problem is, I've seen a trend in fiction of eliminating commas as a way to streamline the prose—to the point it breaks rules and stumbles readers.

Not a good idea.

I agree that writers should avoid using unnecessary commas, especially in fast-paced scenes; but, for Pete's sake, don't take an indiscriminate hatchet to them!

(I know most people would not introduce their parents without saying their names.
I was making a point about commas and sentence structure.)

If you want to look up those comma rules, the topics are appositives (Ex. 1) and separating items in a series (Ex. 2).

One thing I've been seeing more and more often is writers leaving out the comma after introductory phrases. The rule says we may do this if the phrase contains three words or less, but even then, dropping the comma may not be wise. We need to leave it in if taking it out would create confusion.

How can you safely reduce the number of commas?

By adjusting sentence structure to keep them to a minimum. This can be as simple as flipping the location of weak and strong clauses.

Breaking complex sentences into shorter, independent ones is another simple solution.

Commas may be the bane of your existence, but they are needed and their placement matters. Whatever you do, before you publish, get your manuscript properly edited.


Rant over.
Thanks for visiting. :)