Sorry to disappoint you if you were expecting a movie review. This post is about point of view & filter words.

There are several things I'm a stickler about when it comes to editing. Eliminating filter words (or at least seriously scrutinizing each and every one) is at the top of that list.

I didn't used to feel this way. In fact, CPs used to mark my mss up worse than a toddler with a crayon, chiding me—repeatedly—to get them out. Now that I've been writing and reading fiction longer, I've moved over to their camp.

Filter words are words like saw, felt, and heard. They're 'bad' because they filter the action through the POV character, thus creating an extra degree of separation between the reader and the action.

I should probably pause to point out that filtering things through the POV character when it comes to their emotions and how they interpret and relate to what's happening in the scene is good. That's not the kind of filtering I'm talking about here.

If I wrote: Beth stopped when she reached the park and watched Paul, who was standing in the meadow, flying a kite, this is how the reader would experience that line. 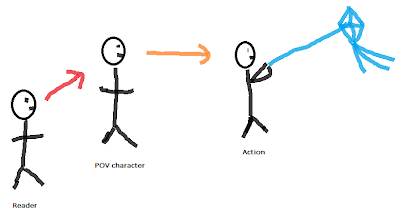 The reader would be watching the POV character, Beth, watch Paul.

But if I wrote:
Beth stopped when she got to the park. Paul stood in the meadow, flying a kite... 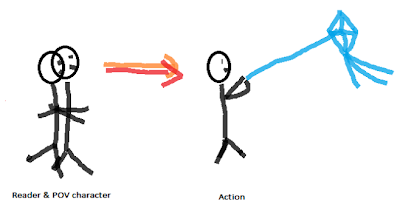 ...it would be as if the reader were watching Paul right along with Beth. The reader's focus would shift from Beth stopping at the edge of the park to Paul standing in the meadow, thus removing one degree of separation and deepening POV.

Here are a few more example pairs.
See if you feel closer to the action with the second one.

Sara leaned closer to the wall and listened to the rumble of male voices.

Sara leaned closer to the wall. A rumble of male voices vibrated her ear.

My boyfriend of five years told me he was going camping with the guys this weekend, then turned and walked away. He'd forgotten my birthday. Again.

I stood there, fuming in his wake, and decided we were over.


My boyfriend of five years told me he was going camping with the guys this weekend, then turned and walked away. He'd forgotten my birthday. Again.

I stood there, fuming in his wake. We were definitely over.

The monster towered over us, its red eyes glaring and its huge steps closing the distance at heart-stopping speed. I shrieked and watched Galen slay the beast moments before it reached me.

The monster towered over us, its red eyes glaring and its huge steps closing the distance at heart-stopping speed. I shrieked, but I couldn't move. Galen plunged his sword into the beast moments before it reached me.

Those aren't the greatest specimens of writing, but you get the idea.

I've become so sensitized to filter words that I self-edit in first draft and rarely even write one anymore. But I know others might not be to that stage or might not like to hinder the flow of prose early on, so for them, I'll give a list.

I encourage you to do a document search of your mss for these words and eliminate as many of them as you can. You might decide to let some stay, but those should be few and far between, especially if you're writing in 3rd person.

Note: Even if you're writing past tense, check present tense, too—and vice versa. Phrases like 'I could see that he ___.' can easily fly under the radar if you only check one tense.

That's all for today.
Thanks for stopping by. :)