By Melissa November 01, 2018
This is a release announcement and a cover reveal rolled into one.

An Honorable Man is available for pre-order!

I've been waiting for this day for nearly a decade. An Honorable Man (formerly Sweetwater in draft form) is the first book I ever wrote. I can't believe it's finally in print! Today is a happy-dance day for sure.

I'm glad I waited, though. The original draft was bad. Really bad. The past eight-plus years have given me skills and perspective that made a huge difference in the finished product.

If you haven't figured out by now, Scarlet Knight is me.
Since my historical western readers (most of them, anyway) probably won't care much for contemporary paranormal, I decided to separate genres by pen name. Managing two author personas won't be easy, but it'll be worth it in the long run.

AHM, as it is affectionately known, is book one in a paranormal romance duet. It can be read as a standalone and has a happy ending, but it begs for a sequel. Book two is set for release in early December.

Please cheer with me. An Honorable Man is finally (almost) here! 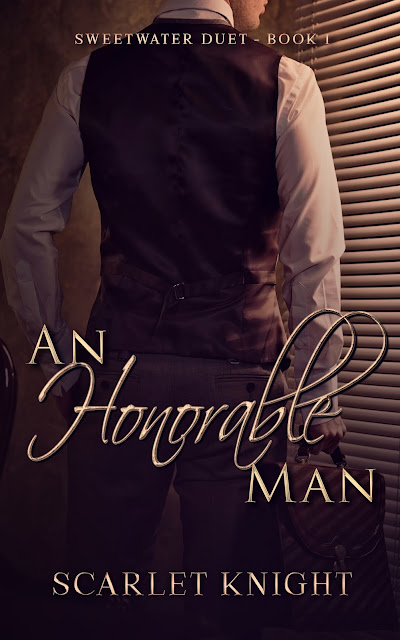 Everyone has secrets. Some are simply harder to believe.

Lauren Campbell is scarred by grief and raw from betrayal. Widowed young and fleeing an abusive boyfriend, she crosses the country in hopes of starting over. The small town of Sweetwater, Texas feels like the perfect place to heal a broken heart, even more so after meeting a handsome thirty-something doctor. But Lauren should know by now—looks can be deceiving.

Infectious disease specialist Dr. Miles Barrett has led a veiled existence for nearly one hundred years. When a troubled outsider stumbles into his lab, his allegiance to his solitary life is tested. Lauren is everything he desires in a woman. She’s also the one thing he can’t have.

Will Miles find a way to share his life with Lauren, or will an act of selfishness drag her into his nightmare?


Author’s note: This paranormal romance is book one of a duet. An Honorable Man contains adult themes and violence but no on-screen sex. Book two, however, cranks up the heat.

Don't leave yet, there's a

To celebrate the book's release, Truelove Press is giving away 3 prizes: a swag goodie bag, an autographed copy of An Honorable Man, and a $50 gift card to Amazon.com (not .au, .ca, etc.).

No purchase is necessary to win, but entrants must be 18 or older and live in the continental United States. To enter, you must signup for Scarlet Knight's newsletter. Contest ends November 30th. Three random winners will be picked from the subscriber list an announced here on December 4th.


I will contact the winners, and each will have 7 days to accept or decline his/her prize. Winners of book and goodie bag must provide a mailing address to claim prize. If winner does not respond within 7 days, publisher reserves the right to pick another winner.


What kinds of author swag do you like? Tell me in the comments!


Click here to mark AHM 'to read' on Goodreads

To be notified of sales, news & new releases,
sign up for Scarlet Knight's
newsletter.


Thank you for visiting!