By Melissa July 10, 2013
In preparation for this interview, I did quite a bit of stalking, and—let me tell you—Jeff Beesler is not an easy man to track. The NSA couldn't do much better.

But seriously...
Jeff and I met at #NALitChat. When he published his latest book, I liked the premise and the cover so much, I begged to be part of his blog tour. *grin*

First a little about the book... 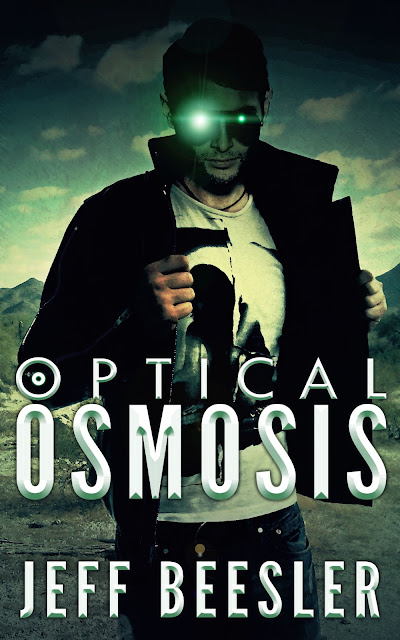 Cool premise, right? And you gotta love that cover.

My grandmother. I was a hyperactive child, always jumping around in the backyard and such. One day, she asked me why I jump around like that. I told her I just have a lot of crazy ideas running through my head. She then asked me, "Well, why don’t you write them down?" The rest, as they say, is history.

As for what inspired me to write Optical Osmosis, originally it started out being a superhero/metahuman type of story. But then as I fleshed it out, I realized I could do a lot more justice to it if I downplayed the heroics to where the main character, Greg, wouldn’t even think of sporting a cape and some tights.

Do you have a favorite scene?

Absolutely! There is a restaurant scene in which Greg finally confronts his sister’s “boyfriend”, Flint, and demands to know why Flint hasn’t done enough to prevent  Greg’s sister, Ashley, from curbing her alcoholism and partying. This takes place in the restroom, but where my favorite part ties into all of this is what happens right after Flint leaves the area.

What song best describes you when you write?


a. I Feel Good - James Brown
b. Still of The Night – Whitesnake
c. Under Pressure - Queen
d. Losing My Religion – R.E.M.

What’s this I hear about you and animal husbandry? You’re not a crazy cat woman in disguise, are you?  (I joke, but animal control just removed over 100 cats from the house next door to my parents.  No kidding.)

Mere speculation. I haven’t had a pet in several years. Although I could always write one into one of my stories.

My Kindle and my phone.

The next question was inspired by Jeff’s Twitter profile pic.


What do you think about when you’re alone in your car?

I’m usually just jamming along to the playlists on my CDs, although I do find myself entertaining all sorts of ideas on the way to and from work.

What’s the biggest misconception people tend to have about you?

That I don’t know what I’m doing.

I do know what I’m doing, but sometimes it’s not easy for me to express that verbally (public speaking being one of my opportunities here). I do have smarts, but they might not be the kind of smarts one would expect from me.

I can totally relate to that. I'm one of those people who thinks of a great comeback five minutes after the other person walks away. :P

What advice would you give to new writers?

Embrace your mistakes, for they are your stepping stones to propelling yourself further. Unless, of course, you make the biggest mistake of giving up on writing too soon, and then live to regret it. If you can quit writing without regretting your decision, then more power to you. You’re free. But chances are you’ll never be free unless you’re writing. Keep at it. It can open doors you never imagined were there.

Born in May of 1978, Jeff Beesler has been writing since the 7th grade, although he likes to point out that his elementary teachers in 2nd to 6th grades kept sending him to Young Author’s Conferences throughout his school district. When not writing, he can be found chatting it up on social media, reading books, or playing computer games. As of June 2013, since his fantasy novel, Spell of Entrapment, debuted, Jeff has sold a total of 98 books.

Want to stalk Jeff?
Here's where he hides...

And you can find his book here...