Grammar Police Monday - To Be Or Not To Be 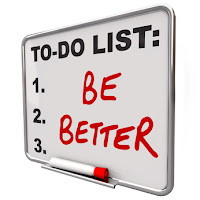 Sorry for the unoriginal title, but it fits. I'm blending grammar, writing and editing today, addressing 'be verbs' as they relate to fiction.

Many writers have lists of words they search out and often edit out of their manuscripts when they go back to polish their prose. These lists include everything from filter words to -ly adjectives, and they almost always include forms of the infinitive to be.

It's fair to say any fiction writer who's been at it long at all will be mindful of am, was, and were. The question is, when on a mission to search and destroy, where does one draw the line?

Over the last couple of years, I've come across several writers who are highly sensitive to this group of verbs. I've known some of them, when doing critiques, to mark virtually every form of to be in the entire submission.

Don't take offense. I'm not scoffing or singling these critters out. Every writer has his or her hypersensitive areas (goodness knows I do!). My goal here is to examine the variance—to look at the grammatical side of the issue, and then open up the editing side for discussion.

Who knows? Maybe the anti-be folks have it right. Maybe those of us in the other camp are too lax. At the very least, I think dissecting it and hashing it out will make us all better writers.

Let's tackle the grammar side of it first.

Linking verb example:
My dog was happy when I tossed her a bone.

Helping verb example:
She was gnawing on it when I left.

Now let's relate this to writing fiction. For this post, I'm going to use third person past tense examples.

Be verbs often result in passive sentence construction, which fiction writers should avoid. No argument there.

Passive construction example:
That sketch was drawn by Paula's brother.

To fix this, one can usually just flip it around.
Paula's brother drew that sketch.

(Did you notice what happened? The main verb changed and the helping verb—the be verb—disappeared altogether.)

The problem comes when deciding where to draw the line between avoid and banish. Obviously, be verbs are needed when writing the English language; but in fiction, how much is too much? Which passively-constructed sentences are allowed and which ones aren't?

My personal opinion is: it depends.
The problem with my way of judging it is, some of those things are fairly subjective.

Let's take a couple of examples that are more clear cut.

Unnecessary uses of to be

One red flag we can watch for is the combination of the words that or who followed by a be verb.

Ex: She recognized the man who was chasing her.

Another red flag is a helping verb followed by a verb ending in -ing. I want to caution you about these, though. Sometimes they can be changed and sometimes they can't. It all depends on whether it affects meaning.

Perhaps helping verb + -ing verb should be viewed as a yellow flag, not red. ;)

Can we safely make that change?
Yup. The meaning didn't change, and the line is stronger for it.

Necessary uses of to be

There are times we need be verbs (and -ing verbs, for that matter). One of those times is when it is required to correctly form the proper verb tense. For this, I'm using an example from my historical romance WIP.

Seth awoke to the sight of the slanted wood ceiling, still surprised by it after three days. He stood and rolled the stiffness from his shoulders, then pulled back the canvas door of the hut only to stop when he saw Angel a few feet away.
She was kneeling on the ground with her back to him, dipping a cloth into a basin of water and washing her face. The soles of her boots peeked out from under the hem of her skirt, and her shirt, still tucked at the waist, hung inside out over her hips. The only thing covering her upper body was the sleeveless top of her chemise. ...

Regarding the line She was kneeling on the ground with her back to him..., some might argue that I could swap was kneeling for knelt, but I disagree.

Knelt is the simple past tense form of the verb kneel. It would imply that Seth watched her kneel. He didn't. She was already in that position when he opened the canvas door of the hut, and she continued to stay that way.

Was kneeling, the past continuous tense of kneel, is the correct tense for this sentence.


Here's a passage containing passive construction. See if you can pick the line out...

(Note: The male character in this scene is referred to as 'he' and 'the man' because Becca doesn't know his name yet.)

He tossed the can aside with a loud clank. “I’m not an invalid. Help me up.” He gritted his teeth in a twisted expression of pain and pushed himself into a sitting position. When she didn’t move, he glared at her. “Help me up!”
Becca flinched, but she did as he asked.
Acting as a human crutch—something for which she was a good height, even bent over—she pushed aside the canvas and helped him out of the hut. The man groaned as he straightened up. His face was pale in the morning light and his forehead glistened with a sheen of sweat.
“You okay?” she asked.
He nodded.
He wasn’t, but she didn’t argue.
The man took a few steps more and looked around.
“There isn’t an outhouse. You’ll just have to–”
“I get the picture,” he ground out.

Did you find it?
Did it bother you?

That's my 2 cents on be verbs.
What's yours?

Do you struggle with them as a writer?
Do they bother you as a reader?
Do you hate them? Love them?
Have any tricks for dealing with them?

I'd love to hear what you have to say.