Grammar Police Monday - Do Commas Give You Pause? Part I 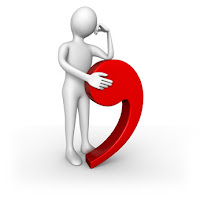 Today I'm beginning a two-part lesson, covering proper use of the comma—one of the most common punctuation errors I see when I critique...and read published works. *gasp* :)
We should all know how to use commas when writing dates and such (ex: Monday, Jume 4, 2012), so I won't belabor that rule or others like it. This post will focus on commas commonly used in dialogue and narrative. In fact, let's get dialogue commas out of the way first.
If you've been writing fiction long at all, you should know the difference between a dialogue tag and an action beat (sometimes called a descriptive line or beat). A dialogue tag tells us that words were said, sometimes telling us how they were said, and must use a word that denotes a way of speaking. (Ex: said, shouted, whispered, yelled, muttered, etc.) An improper tag would be something like 'smiled' because one cannot smile words. Action beats describe action. Dialogue tags are punctuated with commas, and action beats are punctuated with periods.

I don't want to launch into a detailed dialogue lesson. I simply want to make clear the use of the comma for dialogue tags. If the tag comes after the line, the comma goes inside the ending quotation marks (as in 1, 3 & 5). And note: the first word of the tag is NOT capitalized (5, 'the woman') unless it's a proper name (1 & 3, 'Sam'). The first word of an action beat, however, is capitalized regardless (4). It is a separate sentence.
When the tag splits apart a line that would otherwise be written as one sentence, then use commas on each end (5), the first inside the quotes and the last before/outside.
Next, let's touch on the serial comma, sometimes known as the Oxford comma. We know to use commas to separate items in a series or list, but opinions vary on whether we should include a comma before the conjunction at the end of the list. (Conjunctions = and, but, or, nor)
Ex. with 'Oxford' comma: Mary put money, lipstick, and mascara in her purse.
Ex. without: Mary put money, lipstick and mascara in her purse.
Unless your publisher tells you otherwise, you can leave out the last comma. The meaning of the sentence is just as clear, and removing unnecessary commas tightens the writing.
When should you leave the 'Oxford' comma in? When it would muddle clarity or otherwise stumble the reader.
Ex: "I'll be bringing my parents, Edith Baker and Dr. Smith."
If the speaker's parents are named Edith Baker and Dr. Smith, we're good; but if the speaker is referring to her parents AND two other people (a total of 4), then there's a problem. We need another comma.  "I'll be bringing my parents, Edith Baker, and Dr. Smith."
Next rule: Use a comma to separate coordinate adjectives unless one is a color. These are adjectives that work together to modify the same word—in this case, 'bear.'
Ex: Connor looked up at the huge, hairy bear and gulped.
Ex: Connor looked up at the huge, hairy black bear and gulped.
Ex: Connor looked up at the huge black bear and gulped.
Use a comma (two if it comes mid-line) to set off the name of someone being directly addressed.
Ex: "I love you, Mary." vs. "I love Mary."
In the first sentence, the speaker is talking to Mary, telling her he loves her. In the second, he is speaking about her to someone else.
I'm going to stop here for now. I hope you found this lesson helpful. Join me next week for Part II. :)