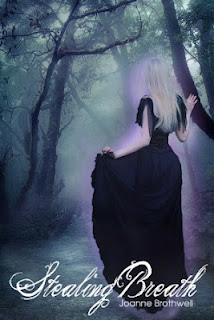 I've signed up for two dates on this tour, so later this month, on Thursday the 29th, I'll be posting a book spotlight with ebook giveaway. Be sure to mark your calendars and come back for that!


An ancient evil has resurfaced,
the soul of the Indigo Child is at stake.
Beware those with the Stealing Breath...


Stefano watched me with granite eyes as if evaluating my credibility. I was certain the woman was alive, but overcome with the pain of processing her memories, perhaps unable to move. I glanced back at her, silently praying she wouldn’t give it away.
“You surprise me with your power, Indigo. You will be worth more to us than I expected. Perhaps you would consider joining us?”
“What makes you think I won’t kill you, too?” I approached Stefano until I was within a very dangerous inch from him. I hoped he wouldn’t notice my trembling.
“You may have power, Indigo, but you are just a fledgling, like our failed Sandra here.” He nudged her with steel-toed boot. “Don’t underestimate me.” He stepped forward, grabbing my arms in an iron grasp and yanking me toward the interior of the hospital. “Now, we deal with Evandro.”
I launched myself sideways in an attempt to escape, but his hold was too tight. My flailing only caused him to lock me in a bear hug.
He steered me along, his jabbing grip pushing me forward. I had no idea how I was going to get out of this. As we turned the corner into the Admissions area, I stifled the urge to wretch. Those four people were still slumped over in their chairs, desks and the floor. Their bodies were flaccid, their faces blank and staring. Catalepsy.
“You did this?” I asked, doing my best to contain my mounting horror.
Stefano smiled. “Of course. We have extracted and consumed their élan.” He walked to a nurse who was slumped forward over a desk, picked up her arm, and dropped it theatrically. “This meat suit will eventually rot.”
I swallowed hard. Free of his hands, I took the opportunity to turn and run.
“Indigentia resisto!” Stefano’s booming voice shuddered through me. I felt as if I’d been hit with the same tearing, burning sensation I’d been afflicted with earlier today.
I doubled over, the pain shredding my insides as if I were being repeatedly stabbed with a knife to the abdomen. I fell to the ground, the pain so all-encompassing that, in that moment, I wished for instant death.
“Indigentia,” Stefano whispered, gesturing with dramatic animation. Suddenly the two Skinwalkers were hovering over me in their physical bodies.
Stefano nodded. “Indigentia a mortis.”
It happened again. All three plunged into me, Stefano included, my soul under assault. The plucking sensation of having my life force squeezed and pulled from its earthly home was an indescribable agony, my ribs expanding, my skin stretching.
A wet squeak erupted in my ears as reality began to collapse in my mind. Every nerve ending screamed, the sensation like acid had been brushed over every square inch of my skin, a thousand knives were being plunged into my back, my hair ripped out at the roots, my nails torn from my fingers.
The bottom dropped out of my awareness, and I had the vaguest sensation of falling. I didn’t stop grasping, clawing at something indescribable, to hold me here, to this body, to this life. I fought to hold on but was losing.
A bellowing snarl rang through the air, along with a glass-shattering bang.
The pressure lifted, just slightly, but enough that I could open my eyes. From my peripheral vision, I could see Evan, Ernie and Paulette enter the room, side by side. In an instant, Evan was at my side and the second our hands connected the energy pulsed from us. The vibration sizzled from him and reverberated around the room in a deafening blast. Everything after that seemed to slow down, as if time itself had gone into slow motion.
All three Skinwalkers burst out of my body, pain shuddering through me. The Skinwalkers’ bodies canted toward Evan, Ernie and Paulette, almost graceful in their predatory stance. My breath caught in my throat.
Evan appeared impossibly immense, as if his entire body had engorged, his arm muscles thick and ropy, a matrix of blue veins popping just under his skin. The energy in the room began to crackle as his presence alone changed the atmospheric pressure around him.

As an added bonus, Joanne is giving away four free reads to anyone who purchases a copy of her book: the prequel novella, Vicarious (published by Crescent Moon Press), plus Skinwalker Lore, The Indigo Children, and Malandanti Incantations from the Key of Solomon. These freebies will be immediately sent when you order her book (just send her a receipt through her contact form, and she’ll send the files).

Be sure to visit the next stop on the tour – Pinkindle – tomorrow for a book spotlight and ebook giveaway—yet another chance to win! :)

For a list of all blogs hosting this tour,
go to These Paper Worlds.